I put a cheek rest on my rifle this week as I felt that maybe some of the accuracy issues were related to my cheek weld and some sort of paralax effect. My scope has a paralax adjustment and it was set correctly so I am pretty sure it wasn't the problem but the cheek rest is nice anyhow. 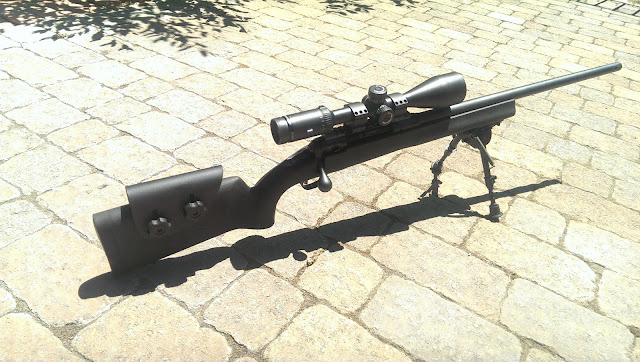 I got one from Matthews Fabrication (http://matthewsfabrication.com/product/adjustable-kydex-cheek-rest-matthews-sleek-rest/) for around $40.  It took about 10 minutes to install and works really well.  You may notice in this picture that the muzzle brake is missing. More on that later!

From my last range session, I determined that I wanted to try a bigger batch of loads using 70gr of Superformance Powder.  This should yield velocity at around 2800FPS with the 208gr AMAX. This is good enough for 1000 yards and more.

I arrived at the range early in the morning (8am is early for me) and the weather was perfect at 80 degrees no wind.  This was to be a hot day so I wanted to get my shooting done early.

I ran my first 5 shots over the chrony and here are the readings:

Almost exactly where I wanted to be.  I was a bit surprised on the huge jump between the cold bore shot and all the others.  The first group was around 1.5" which is much better than before but still not where I want to be.  There was no flattening, cratering or signs of over-pressure otherwise.  This seemed like a viable load if only it groups a bit better.

My next 5 shots were as follows:

I had a cluster of 3 together at about 1/2 inch and then 2 right on top of each other about 1" away for a total 5 shot group of about 2in.  Not great but interesting as the rounds matched up with the velocities almost exactly.  shots 8 & 9 were the two that were together. I am going to play around with this load a bit more in the future and be more precise. These loads were sort of slapped together.

At this point, I took off the muzzle break as I wondered how it might affect the accuracy and speed of this load.  The next 10 shots were much more consistent in velocity but not any more accurate.

Shots 11-20 ranged between 2809 - 2817 and were very consistent however I was still not able to produce better than 1.5" groups at 100 yards.  Its still a new barrel so I probably need to give it more time and a good proper cleaning. More to report later!  All I know is that the muzzle brake is your shoulders best friend.

Posted by GunBlogger at 2:16 PM