This last weekend I decided to try some different loads including a factory loaded box of Federal Gold Medal Match 190GR SMK. My chronograph wasn't working correctly (maybe finally time for that MagnetoSpeed  chrono! (http://www.magnetospeed.com)) so no FPS data this time.

I started with the federal match ammo and right out of the gate things looked good! My first 5 shot group measured .650 center to center.  The next 15 proved to be very similar although each group was consecutively larger. I noticed that as the barrel gun heated up, the groups elongated vertically. After burning up that $52 box of ammo, I decided to try some new reloads out at the 200 yard range.


I had loaded up some more of the 175gr Sierra TMK and wanted to try those with a different powder. I had some success with the Superformance in the past but decided to try some H4350 this time.
I was using full length resized PPU brass with CCI 250 mag primers with a 73gr powder charge and overall length of 3.6".  I estimated velocity on these around 3100FPS.

My first 5 shots at 200 yards measured just over 1.8".  Not terrible but I think had I waited longer in between shots this group may have been even tighter. 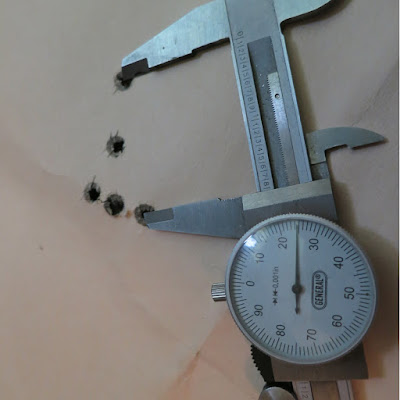 It was a hot day 104F and the barrel seemed to heat up quickly and cool down slowly. Again my next groups begin to string vertically, almost predictably such that I could aim lower each shot and get them to land in the same place. I wasn't really waiting in between shots and was probably firing about a round every 20-30 seconds.

My gun seems to like this 175gr TMK so I plan on doing a lot more experimentation with this load in the future.

I also shot some 2" groups at 200yd with 190gr VLD bergers with 75gr H1000.  This was with the hot barrel too.  So next time around will be trying that load with cold bore to see what we can do.

Posted by GunBlogger at 2:24 PM